The Poughkeepsie, NY Chapter of the Barbershop Harmony Society, chartered on August 7, 1961, was started by a group of seven men who were enthusiastic about bringing quartet and musical excitement -- barbershop harmony style -- to the Mid-Hudson Valley of New York. From that beginning, the Newyorkers' emphasis has been on quarteting, producing exciting shows and improving singing quality through competition. Our young chapter grew quickly under the musical leadership of Bill James and was called colorful, exciting, unpredictable, and competitive.

Very soon, the Newyorkers were staging some of the hottest shows in the area and competing vigorously at the District level. We won our first Northeastern District Chorus Championship in 1964 when we were only three years old and quickly followed with wins in '65, '68 and '69. Our 6th Place finish in St. Louis in 1969 remains the highest ranking ever achieved by a chorus in our District.
We enjoy the prestige of a few innovations within the Society:

We've compiled lists of members across the years. The lists may have mistakes in them and we'd appreciate any improvements that you could offer. But if you're trying to remember an old friend, maybe you'll find him here. 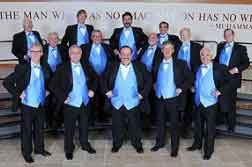